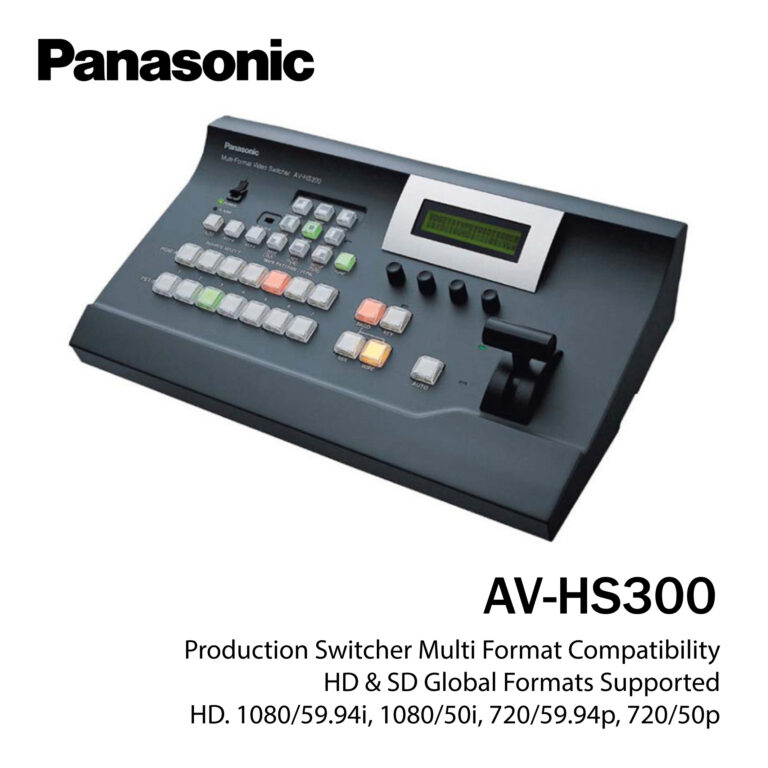 The Panasonic AV-HS300 unit is a single-ME digital video switcher that can support multiple HD and SD video formats in a compact design. The Av-HS300 can optionally support HD analog component inputs in addition to the five SDI inputs and one DVI-I input.

The AV-HS300 has frame synchronizers incorporated in each of the inputs. Meaning that signals can be switched without “shocking” or “freezing” on non-synchronized video signals. You can also import images created from a PC easily via an ethernet cable (CAT5).

The standard configuration consists of six inputs (five SDI inputs and one DVI-I input) and three SDI outputs (PGM, PVW and AUX). The SDI inputs support active through outputs. Key inputs can be selected from the six video inputs for use.

The AV-HS300 contains a high-performance 10-bit frame synchronizer to enable non-synchronized images to be input. By using the BB signal output, a system can be configured using the switcher’s sync signals as a reference. Gen-lock is also possible with external sync signal generators (BB or TRI signals).

The AV-HS300 provides nine different waveform patterns as wipe patterns to add borders or soft effects. Key combination supports self keys and linear keys, and key inversion is also possible. Also the AV-HS300 can (Ethernet and control interfaces supported) import images created on a PC into its frame memory over Ethernet (100 Mbps or 10 Mbps) and use them as background images or key input signals. External control using RS-422 or GPI signals is also supported. The unit also comes with six tally outputs.

The unit is powered by an external DC 12 V power supply so it can be used not only indoors but in the field as well.
(The unit is not constructed to be rain-proof or drip-proof so keep it away from rain or moisture.)

The simple panel layout which enables the functions to be operated directly enables speedy live transmissions. Preset-like operations can be performed on the LCD panel using a menu-driven format.