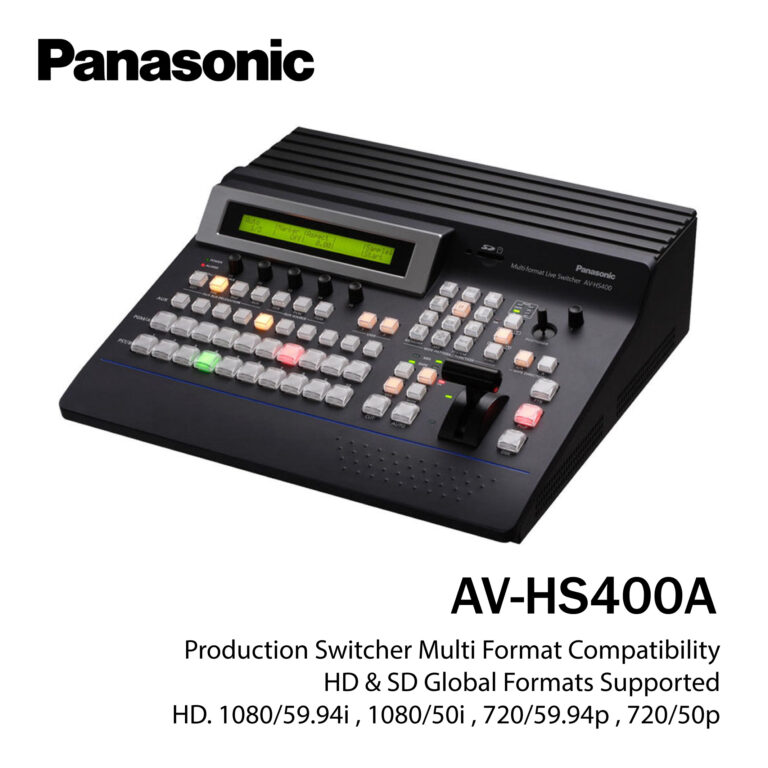 Panasonic AV-HS400 is a 1 ME digital video switcher which supports a multiple number of HD and SD formats. Despite its compact dimensions, the video switcher comes standard with 4 input connectors and can support 8 input connectors when an option board is used.
It also has a multi view display function that allows split-screen display with up to 10 screens. It is capable of providing transitions (wipe, mix and DVE) as video effects, and keyer (luminance keys and chroma keys), DSK and PinP specialized hardware is provided as a standard feature to enable video productions in many different forms.
The unit also supports SD memory cards so still image data (BMP, JPEG) can be imported from SD memory cards into the unit’s frame memories for use as background images or key materials.

This unit enables up to 10 lines of programme video (PGM), preview video (PVW) and input video signals to be
displayed altogether on a single screen at the same time.

A high-performance 10-bit frame synchronizer is incorporated for all the inputs, and asynchronous video signals can be input. By using the black burst (BB) output, it is possible to construct a system referenced to the synchronization of the switcher.

A genlock function is provided, and an external synchronization system using external sync signals (BB or TRI
signals) as a reference are also supported.

Along with the standard wipe, mix and cut functions, the unit can provide size reduction, slide and other DVE transitions.
The unit comes with luminance keys and chroma keys are provided as keyers as well as specialized hardware in the form of the DSK (downstream key) and PinP (picture in picture) functions as a standard option, enabling video productions in many different forms.

Live transmissions can be delivered speedily thanks to the simple panel layout which enables the various functions to be operated directly. Presetting and other similar operations are performed using menus on the unit’s LCD screen or in the form of onscreen displays (OSD) which appear an external monitor