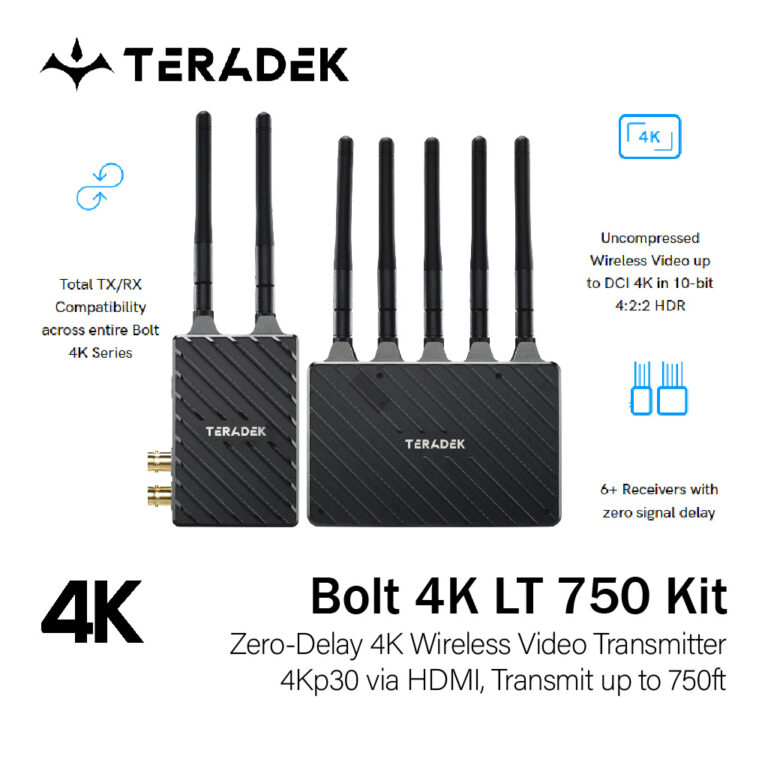 Transmit and receive uncompressed Wireless Video up to DCI 4K in 10-bit 4:2:2 HDR. Your HD productions can move freely from up to 750′ line of sight with the Bolt 4K LT 750 3G-SDI/HDMI Wireless Transmitter and Receiver Kit from Teradek. The kit includes a wireless transmitter and receiver that features a bright OLED display.

The transmitter inputs up to 4K video over HDMI or up to 1080p60 video via 3G-SDI, and the receiver outputs video via HDMI and 3G-SDI.

The Bolt 4K LT has a range of up to 750 feet. That’s a 50 percent range increase in distance from its predecessors, the Bolt 500 respectively. With this increased transmission distance, cameramen and videographers can cover entire production sets without dragging around connecting cables. Not only does this increase mobility and make a spotter’s job easier, but a wireless set is safer and less likely to tip expensive equipment.

Not only is the video wireless, but Teradek integrated Bluetooth technology so the controls can be wireless, too. Using the Bolt Manager iOS app from Teradek, creators can view spectrum analyzers, change receiver channels, and adjust video output settings. The spectrum analyzer is helpful when the magnitude or frequency of one of the signals is weak or being blocked and you need to troubleshoot.

Send Signal up to 6 Receivers
Link up to 6 RX receivers to any 1 TX transmitter to enable multiple points of viewing.

Universal Cross-Compatibility between all Bolt 4K Devices
Send or receive signals between any Bolt 4K series of devices for expanding workflow requirements.